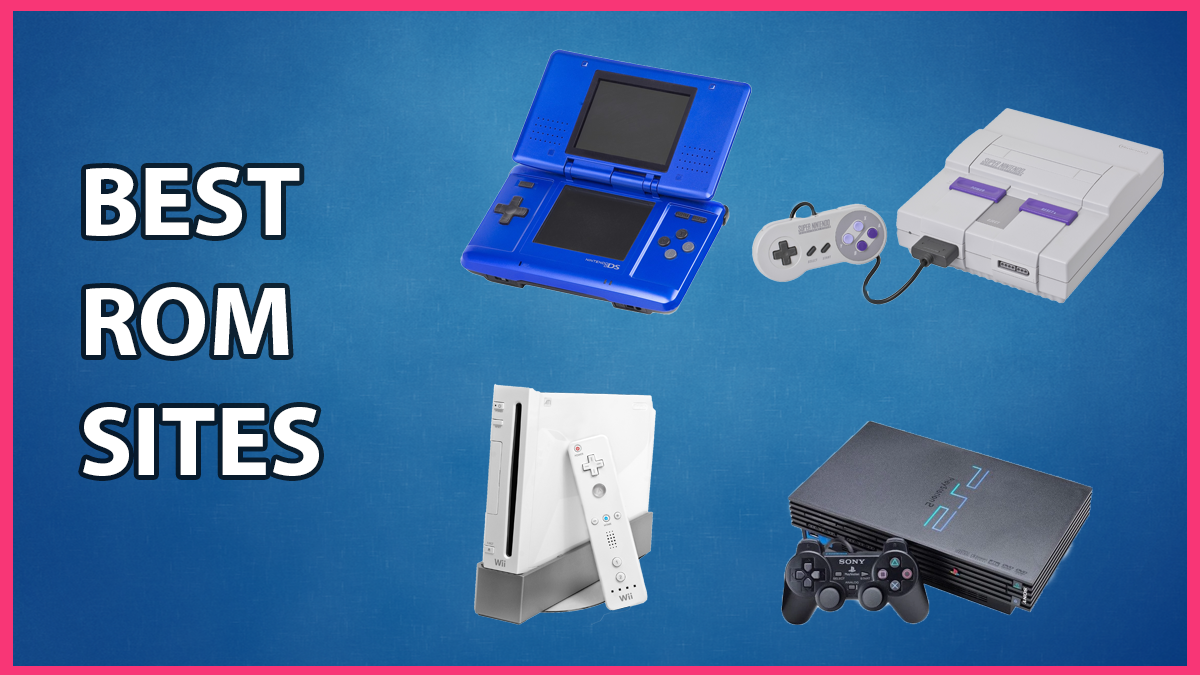 Console gaming has its charm. You power up and start playing without a hiccup. The fun reaches a different summit when you are playing with friends.

And let us not forget the retro consoles. They have been an integral part of millions of lives while growing up. The computer’s power has beefed up, and it has become within the realms of affordability for most of us.

You can now play your favorite classic console games on the computer using a console emulator.

For playing console games, you will need ROMS as your original disc may not work anymore.

Check out the compilation of the best ROM sites that are safe and trusted for downloading all console games for free.

How To Choose A Safe ROM Site?

Always look for a ROM site that is old and trusted. Better to use one with fewer adverts.

Look for site that provides verified ROM for downloading. ROMs usually comes in compressed ZIP files. After downloading the ROM always scan it for malware and viruses. Avoid installing any bundlewares with it.

Look for good reviews and comments before you download any ROM.

Disclaimer – The article is for educational purposes. Use your own original BIOS for playing games after gathering the game DUMP from third-party sources.

Best ROM Sites That Are Safe 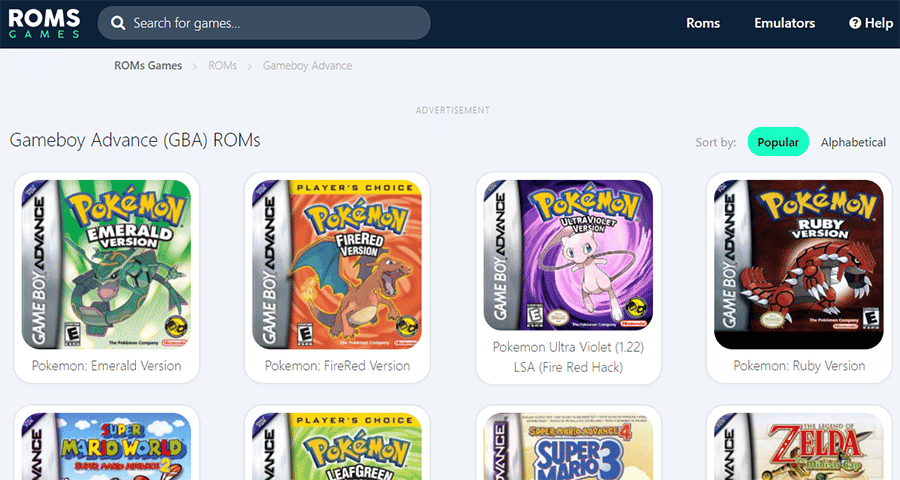 Starting with ROM site that has nearly all the modern consoles game dumps. From Nintendo 64 (N64) to Sega Master System, you name it, and they have it.

The ROMS are categorized by consoles, as well as by some famous retro emulators such as MAME. There is a search bar that can search both ROMs and emulators.

Talking about emulation, there is a dedicated section for emulators, which is also segregated by consoles. 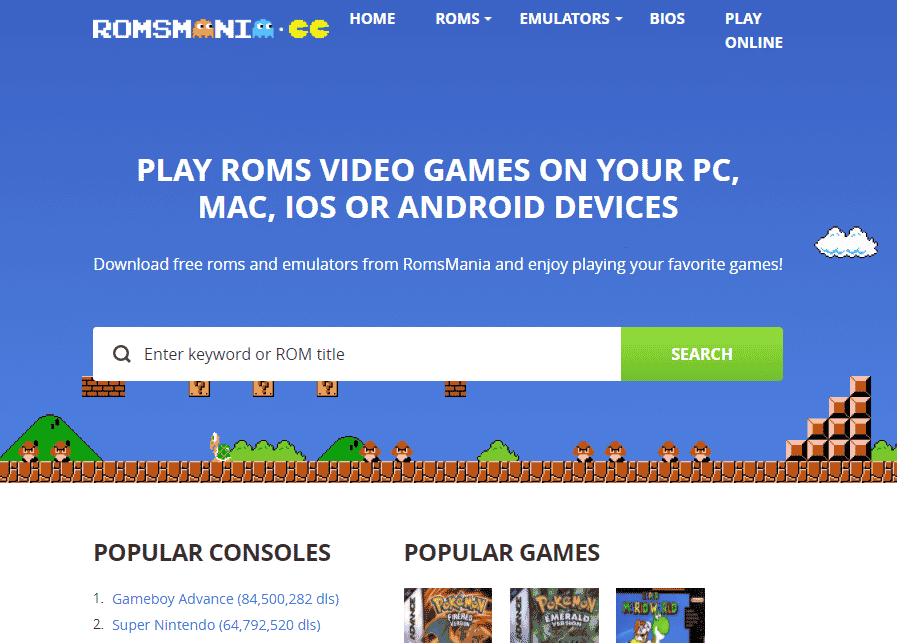 Roms Mania has been around for a while now, being amongst the most popular safe sites for downloading ROMs.

On the homepage, you greeted by a prominent search bar that is difficult to miss. Put your name of the game or a keyword relevant to it.

RomsMania houses ROMS of over 100 consoles such as GameBoy, GameCube, Sega, SNES, amongst others. On top of that, they have a library of over 5000 video game titles. 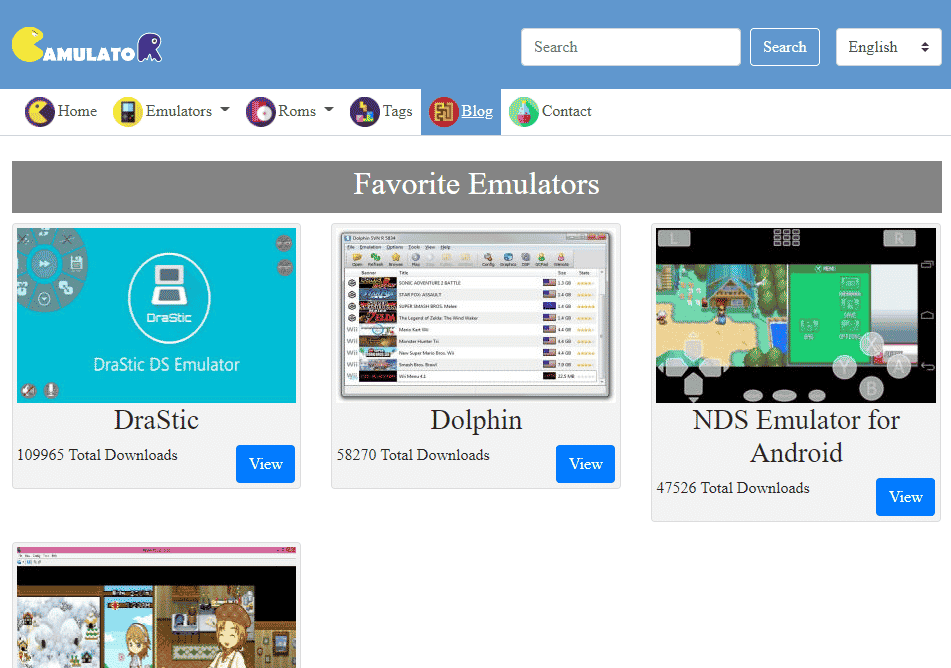 Specializing in Pokemon ROMS, Gamulator is a console games site with a formidable collection of video game titles.

You can view the site in four languages – English, Spanish, French, Portuguese. The website has ROMS of over 45 video game consoles.

Apart from ROMS and emulators, there is a blog where the developer posts compilations and gaming guides of different kinds. 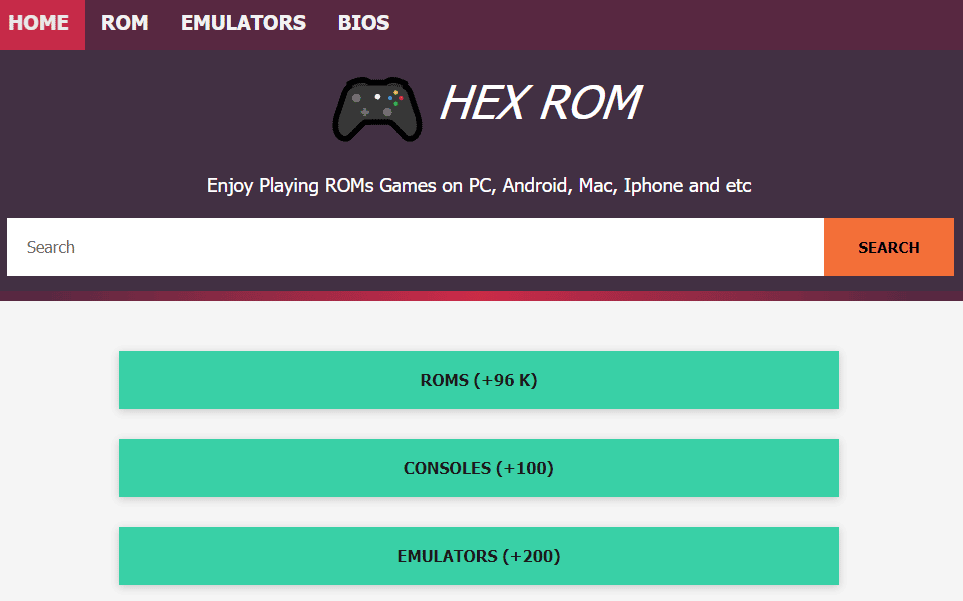 Download ROMS of your choice from Hexrom, which is considered the best ROM sites for all modern and retro consoles. They have over 200 Emulators for 100 plus video game consoles such as the PS2, Sega Gensis, Wii, etc.

As soon as you click on the download button, a new link is generated within a few seconds. The download speeds are normal and may depend on your Internet connection.

The website houses over 95,000 ROMS of video games across different consoles. There are no ads on the website, which is a rare sight in this niche. A clear contender for the best ROM site to download console games. 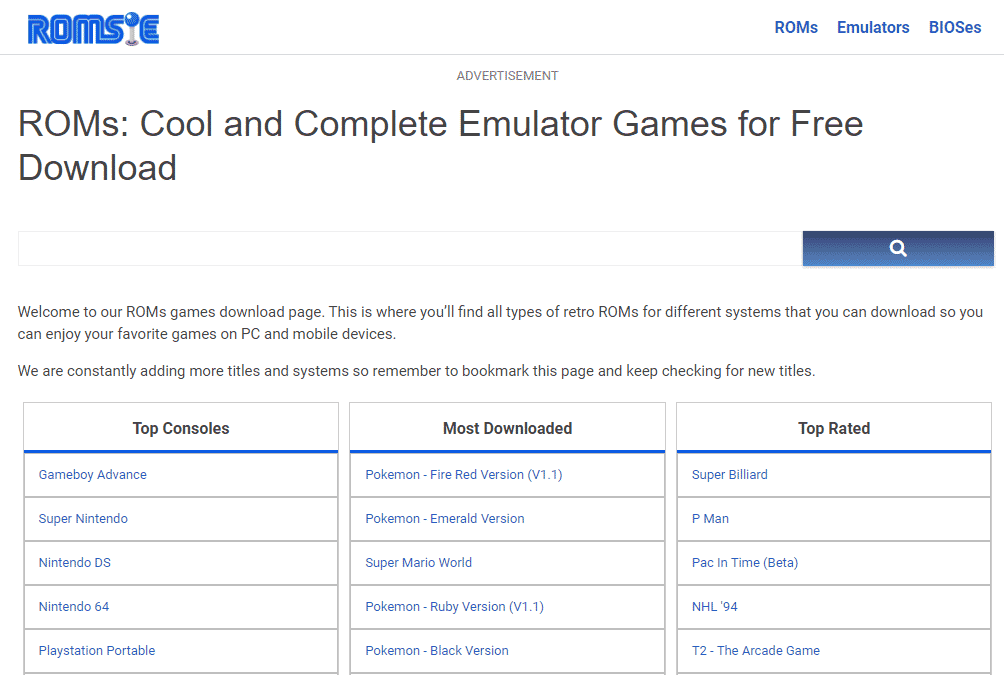 Romsie is a rather conventional and simple website. All the relevant information can be found on a single webpage.

On the homepage, you will find charts of most downloaded, top consoles, and top-rated. When you are looking for console games recommendation, these charts will help you decide. 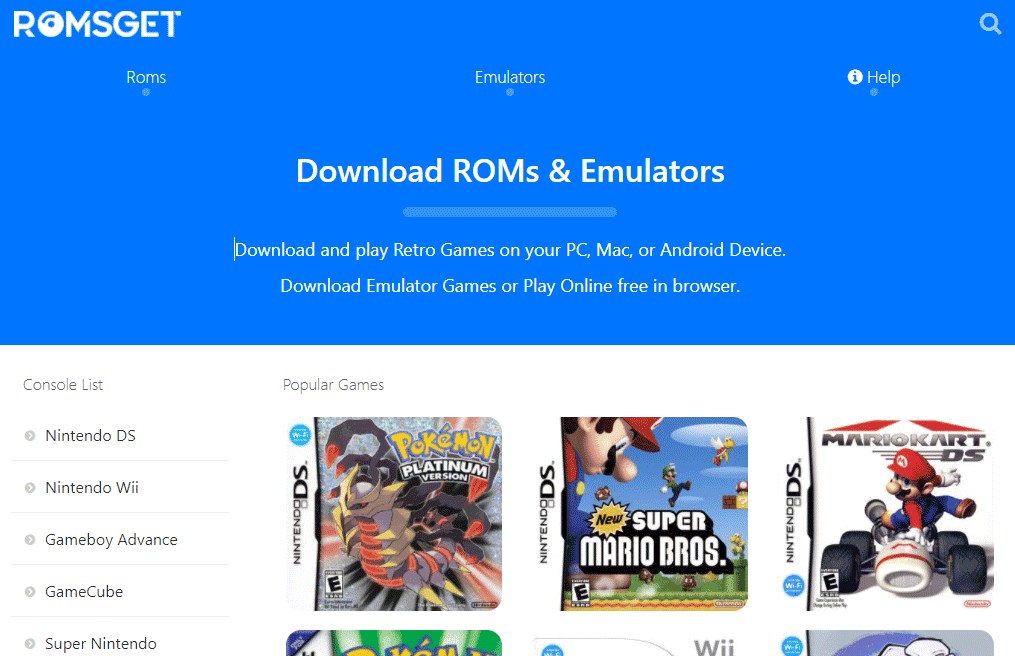 Next on the list is amongst the best ROM sites for console games. Sans the frills; you can download it by visiting the game page.

We found no ads, similar to what we experience on Hexroms. There are comments on every games listing that will help ascertain the reliability of the video game ROM. 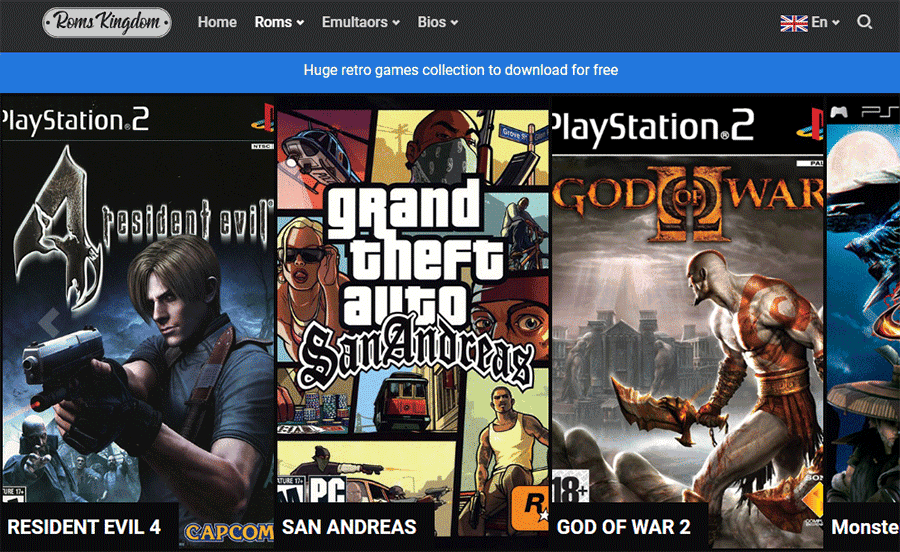 They have an extensive library of Retro console games. And the search results can be sorted by different parameters.

Talking about the download speeds, you will not be disappointed with ROMS that run into a couple of gigabytes. The speed is constant across the download time. 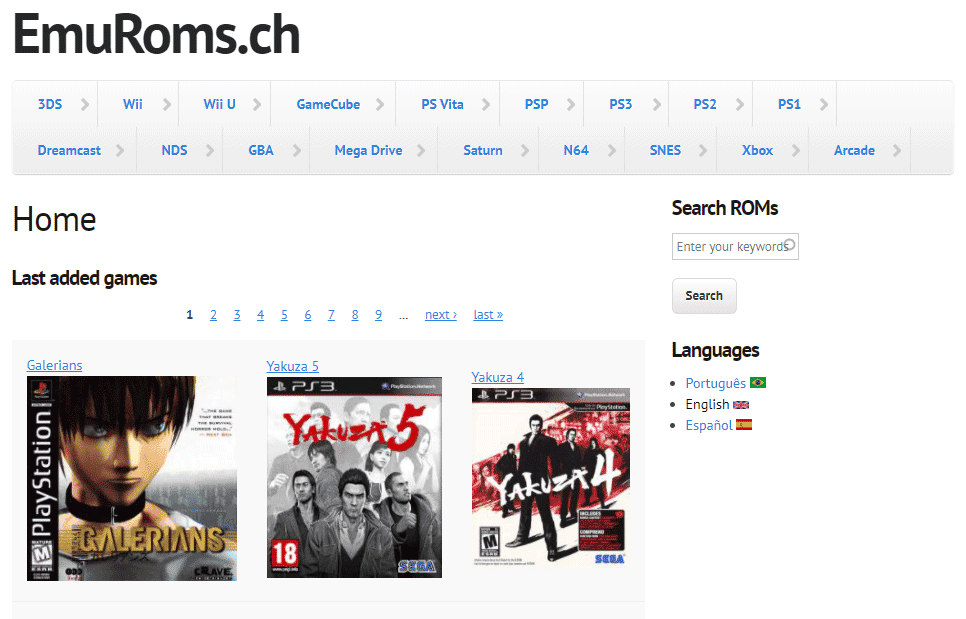 We did not find any ads on this, and its amongst the best ROM site to download ROMs. Pokémon Red and blue, Super Smash Bros, Tekken, you wish it, and they are available.

There are no direct download buttons. Instead of that, you will get magnets links to torrents. They can be downloaded using any standard torrent client such as uTorrent, Qbittorrent. 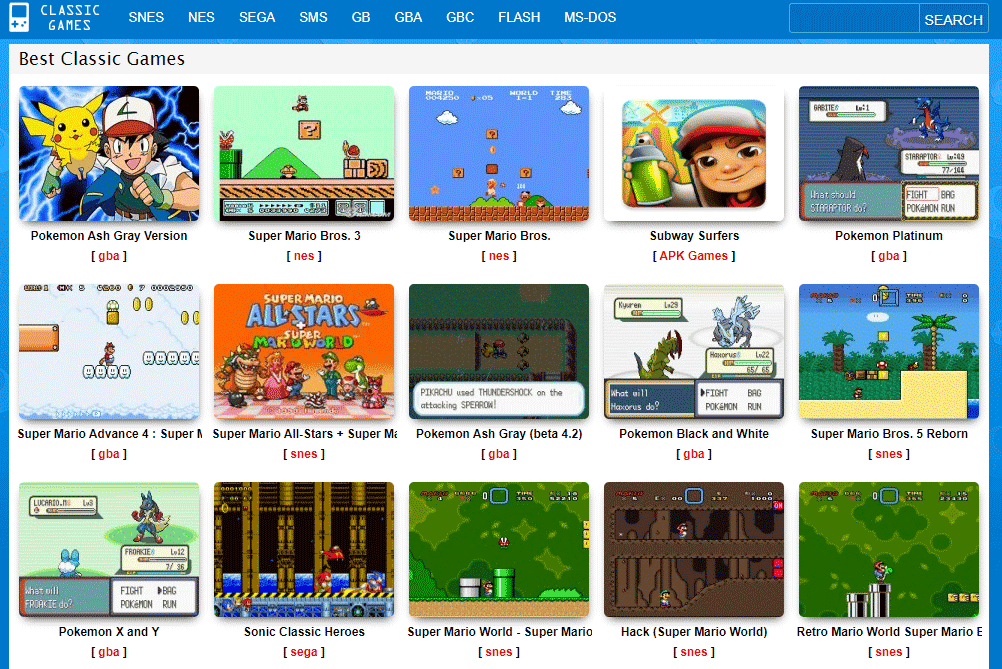 Now we have a website which has all the old school game console games. You can play games directly in the browser. ClassicGames have added Google enhanced search, which allows you to search for ROMS on the site with ease.

They offer games on nine different consoles. It includes NES, SNES, GBA, SEGA, GBA, GBC, FLASH and MS-DOS. You can filter the games by clicking on the categories.

As the website relies on Adobe flash, make sure to use a web browser that supports Flash. Major browsers have stopped supporting Flash. 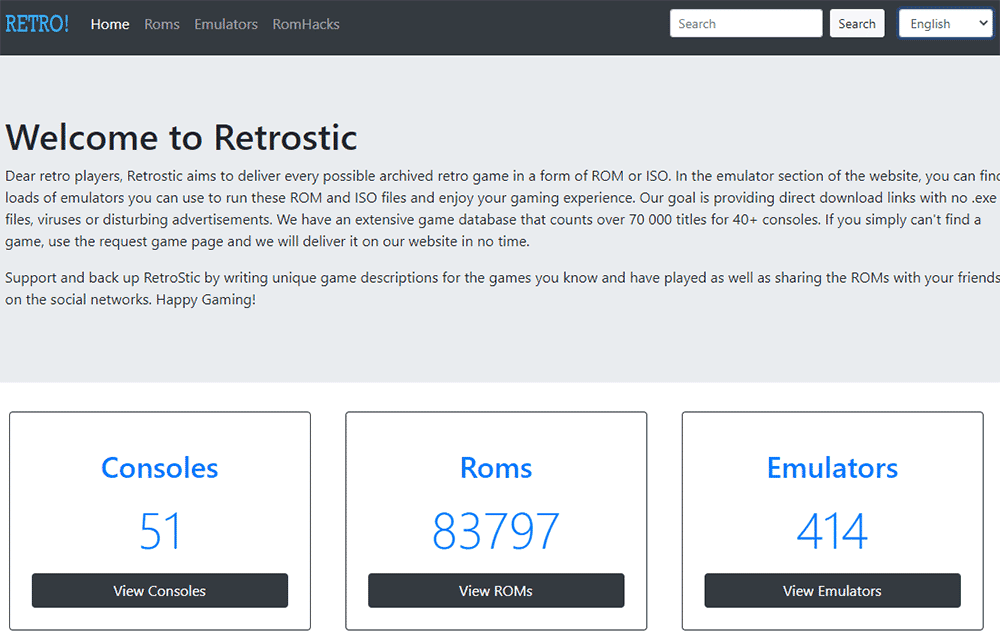 Retrostic offers retro games in the form of ROMs and ISOs. They have a massive collection of 80,000+ ROMs of over 50 different consoles.

Apart from consoles games and emulators, they also have a library of ROMS hacks. They can be searched using filters like genre, console, category, and game title. 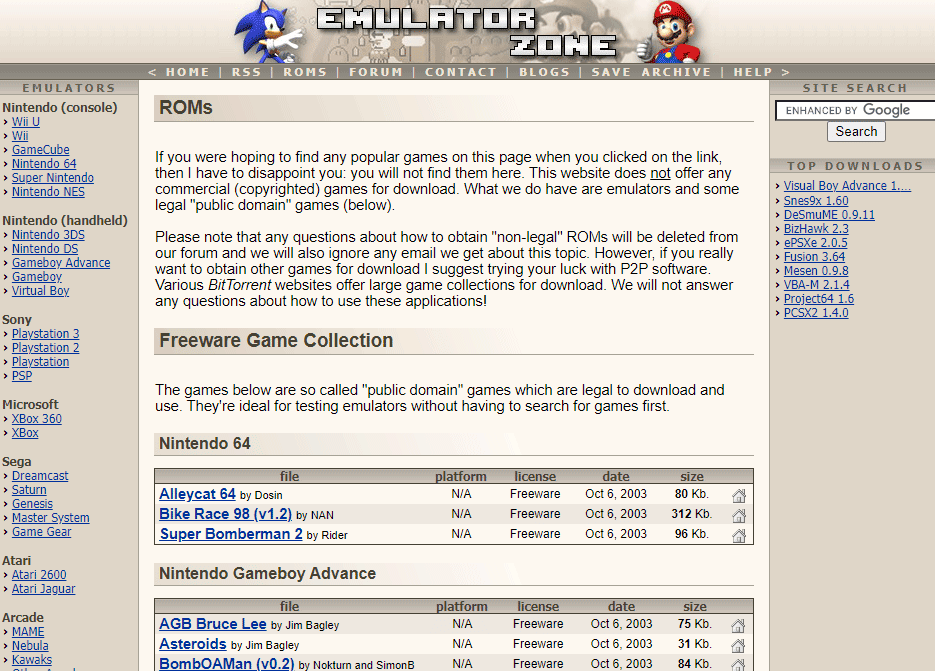 A rather underrated but safe rom site is Emulator-zone. Along with ROMs, you can also download emulators for different consoles here.

The site offers free ROMs that are legal to download. You will find games for Sega Genesis, Sony PlayStation, Neo Geo, Xbox and a few of the other retro consoles. 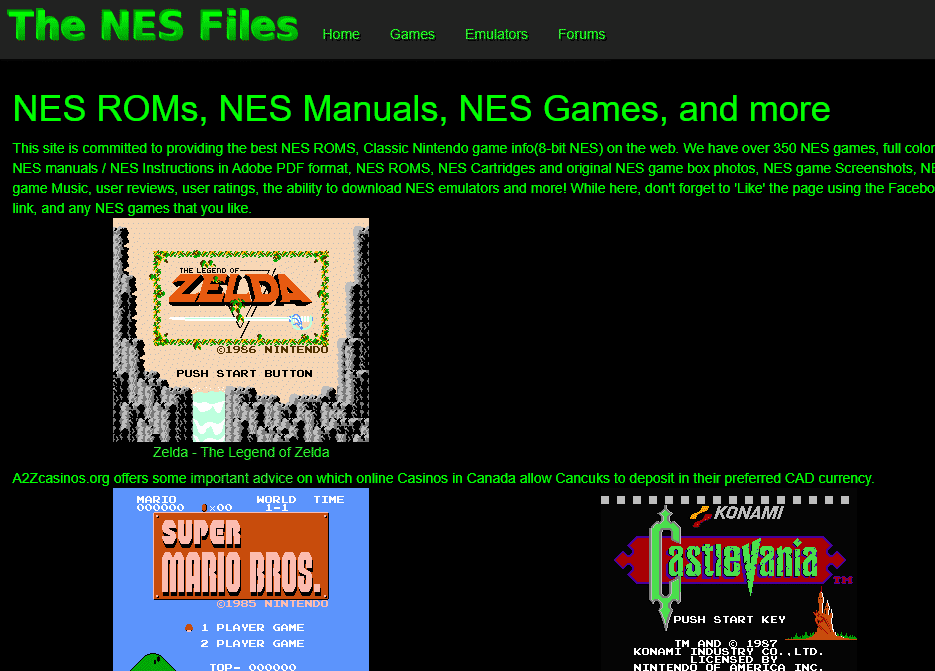 The name gives it away before we can say anything. You will find all genres of NES ROMs on this trusted site.

NES is an 8bit home video game console from Nintendo. Find games from Contra to Fist of the North Star.

On top of that, you will also find detailed manuals and guides of the games developed by the game studios. 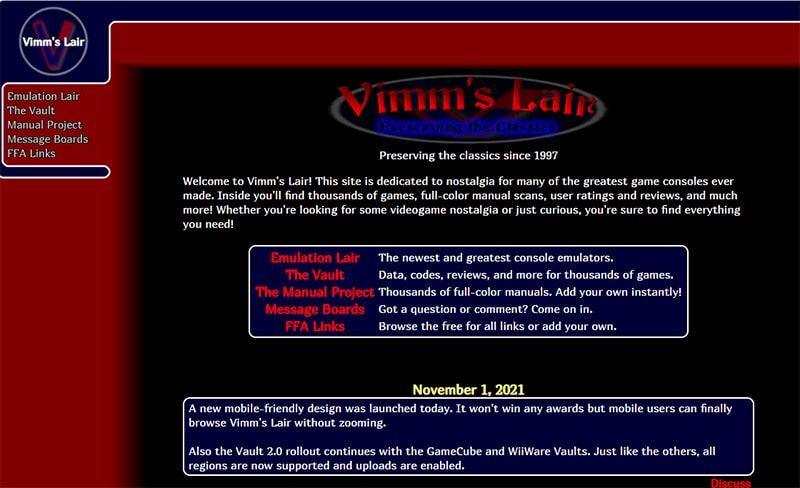 Vimm’s Lair has been around for over two decades now, with its first appearance in 1997. The ROM site has every available game released for a major console in the US.

The game ROM site has titles from 18 different consoles to offer. Here the collection includes both TV and handheld consoles.

You can search for ROMs using the standard search or go advanced, which filters based on rating, release, size, players allowed, etc. 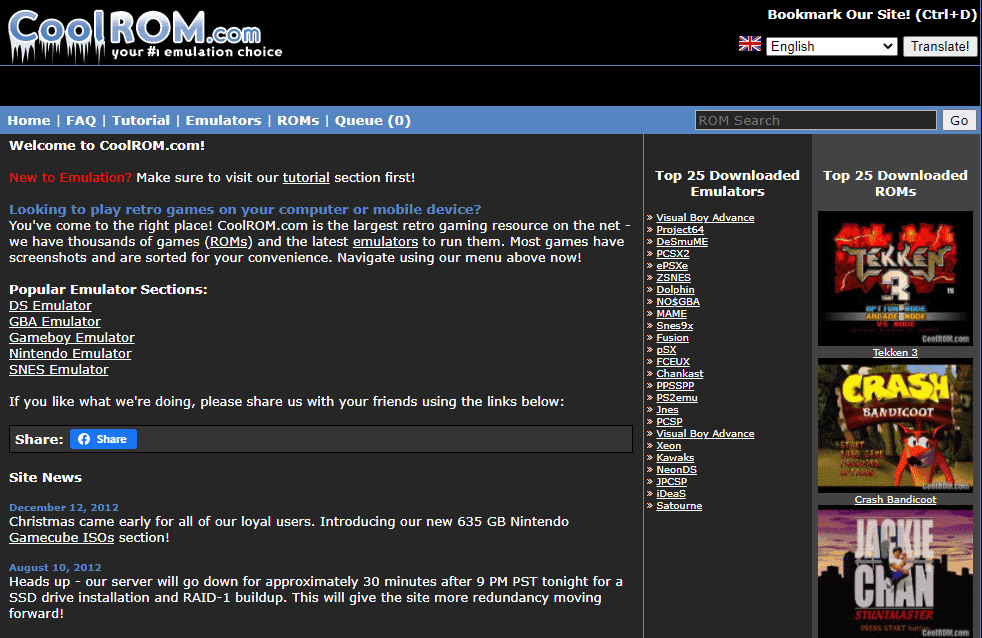 Find the early age retro ROMS of games for consoles as old as Atari 2600. You will find the likes of Atari Lynx, Namco System 32, Neo Geo Pocket, amongst others.|

Nintendo Console ROMS are not available. PS2 and PSP have been included. The ROMs cannot be downloaded directly. You will have to download their sponsored download manager, which will run consequently down the files. 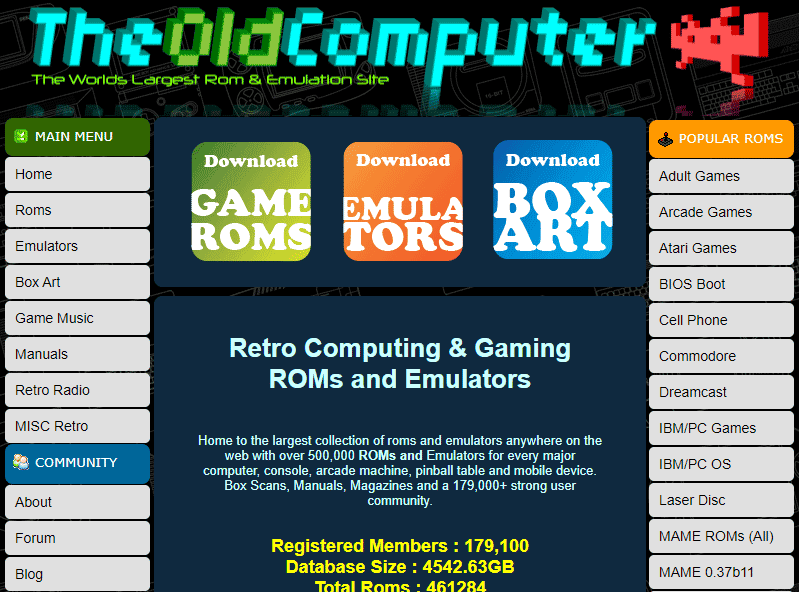 TheOldComputer is a community driven portal that has a collection of over 500,000 ROMS across 550 plus systems. Amongst the best ROM site for the paid users.

Features are limited for the guests and registered users. The unlimited plan allows the user access to the entire website, including all the available ROMS.

You can donate a certain amount above the lower ceiling for acquiring a paid plan.

NiceRom has ROMs of over 31 different video game consoles. They include the likes of Famicom Disk System, Dreamcast, Atari 7800, etc.

When you click on the download button on a game’s page, it will redirect you to another page. There you get the option to either download the file in a zip or try the online emulator. 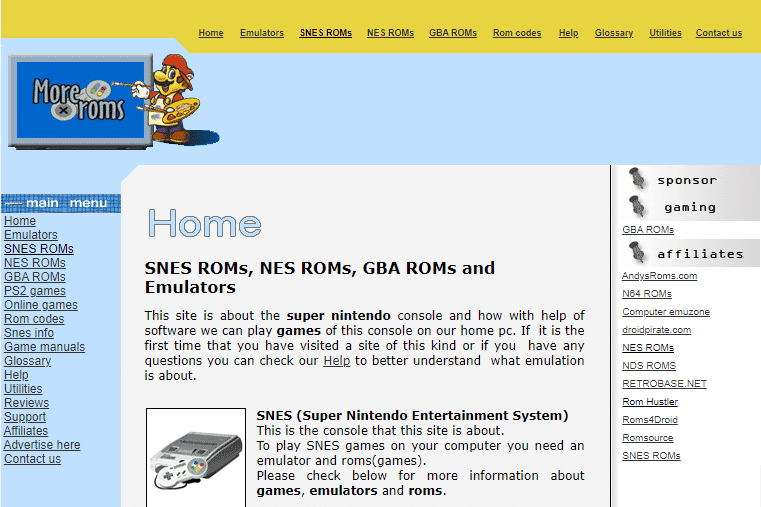 Dial back in time, and you will find SNES ROMS, NES ROMS, and GBA ROMS. When you are looking for Nintendo games, this is among the best ROM sites you can find on the Internet.

Downloading games is easier than most free ROM sites. Click on the video game’s name, and the download popup will appear on the screen. 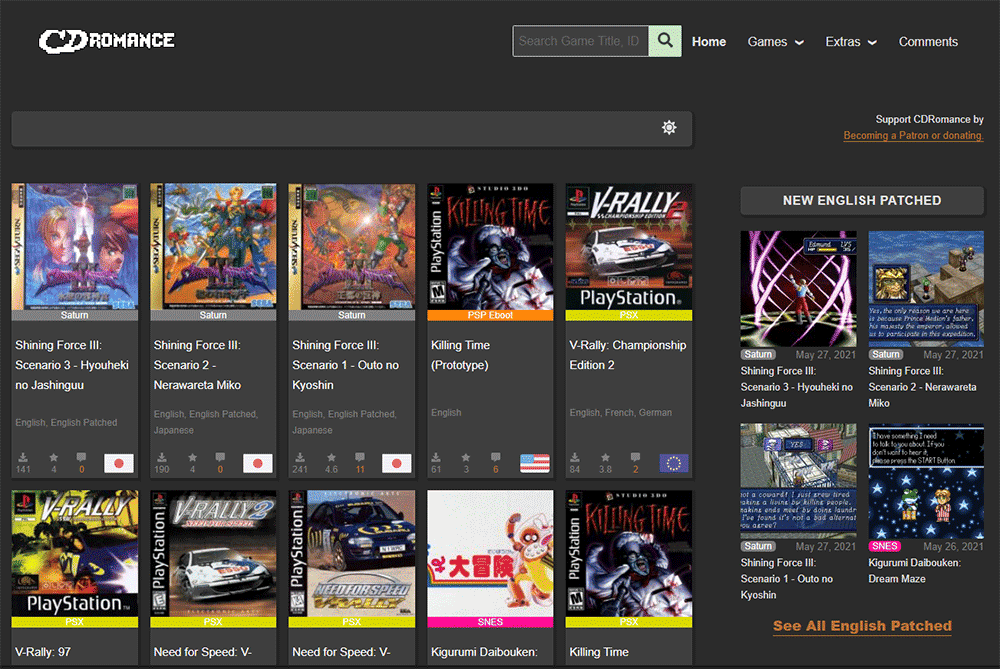 CDRomance has emulators and its kin, ROMS, and guides. Each file can be downloaded with a single click. All the game ROMS are in 7zip compressed file.

You will find ROMS in Japanese, English, French and other major languages. The games can be found categorizing by the languages as well. 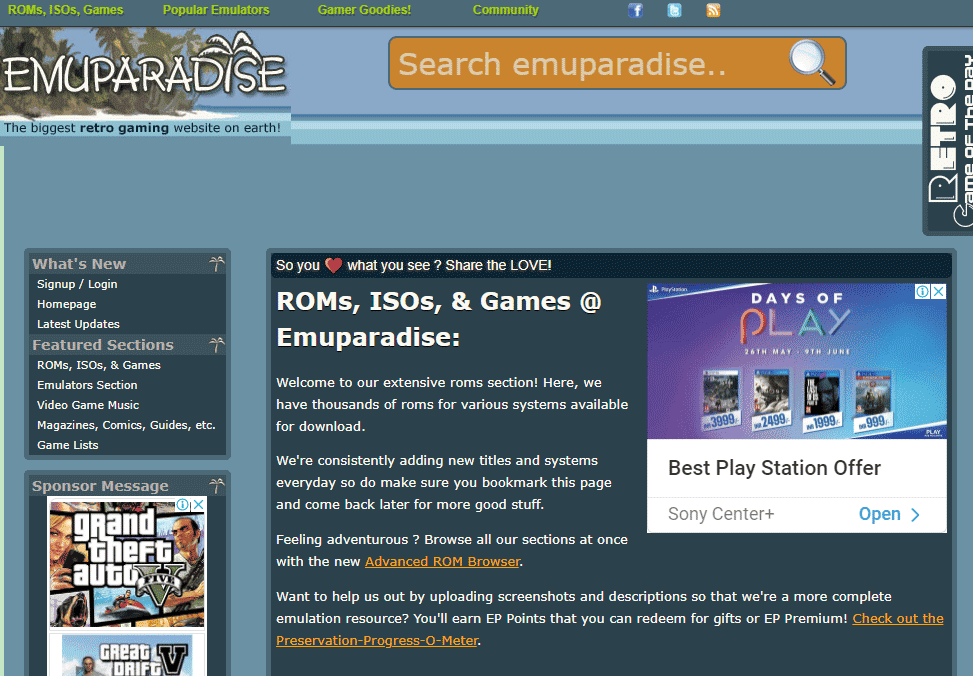 Saving the best for the end, Emuparadise is considered the best ROM site by several retro console gamers.

Diving into the site, they have a Retro Game of the Day section. It has a new game every day, handpicked by the community.

For downloading the ROMS, you will need to register and login to the website/forum. 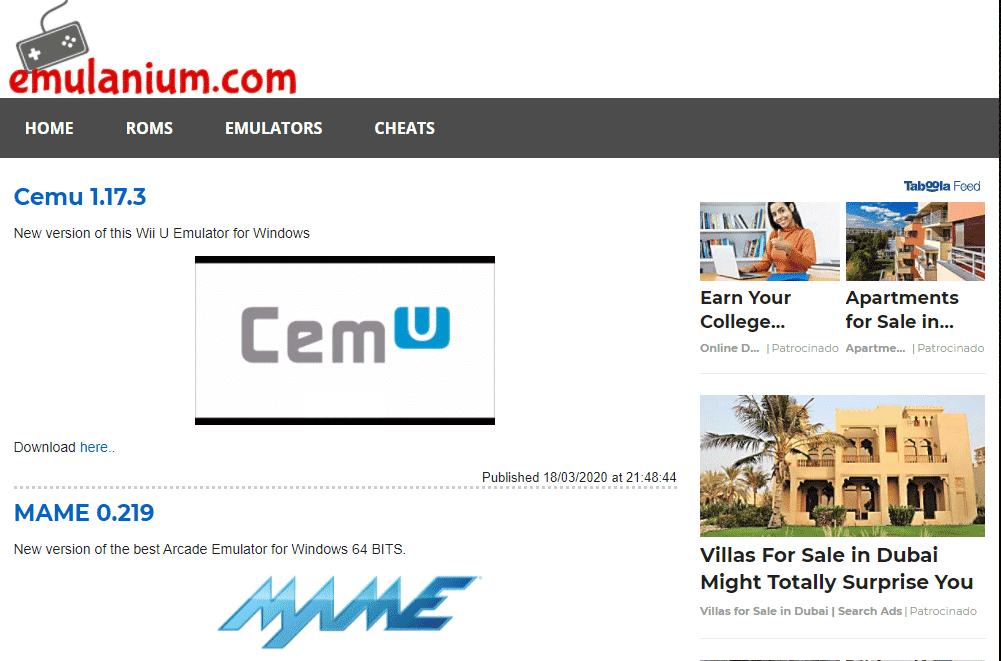 Ending the list of the best ROM sites with a retro collection of games for ten different consoles.

Emulanium is a good room site. On the home page, you get a list of CPS1, CPS2 ROMS, SEGA GAME GEAR and SEGA MASTER SYSTEM ROMS, amongst others.

Click on any of the consoles, and the games will be displayed in alphabetical order.

It is illegal to download ROMs unless they are a freeware and are in public domain. Even though you own a copy of the game you are not allowed to download the ROM without the permission of the copyright holder. In fact, most of the ROM sites are also illegal.

It is better to buy an original copy of the game instead of downloading the ROM.

These were some of the best ROM sites to download games, such as Sonic the Hedgehog, Super Mario Galaxy, Brain Age, amongst thousands of others.

Few of the listings of some of these new but safe ROM websites will be dead. Notify the admin for fixing the links.

Beware of the bundleware that is provided with few games files. Make sure to keep anything getting installed without your consent.