Windows has been at the forefront of the choice of users for their computer’s operating system for several decades now.

Most of us have used Windows OS at some points in our lives one way or another.

Until recently, ATMs across countries around the world used Windows XP as their operating system. They have started shifting to newer versions of Windows now.

Installing Windows on a PC could be a hectic task.

You can use the Simulators as a Windows emulator for Android to use it on your smartphone.

Why Windows Emulators are Difficult to find?

Smart devices such as smartphones, tablets have yet reached that milestone to power an OS developed for computers to run on them.

Although there might be a scarcity of good Windows PC emulator for Android, we have listed down a few.

They come as close as they can be right now, with advancements being made every few weeks through updates.

Here are the best Windows emulators and simulators for Android that are currently working on a wide array of Android devices.

This is as close you will get to the Windows emulator for Android if you are looking to run Windows apps on an Android device. Wine is a multi-platform emulator of sorts to run Windows applications on different operating systems.

You can run 32-bit, as well as 64-bit Windows app on the emulator. They have added support for earlier Windows such as 3.1 in their recent updates to the emulator.

The stable version for your device will take some time to find. The user-interface is more of Windows 98 theme, powered by Windows 7 backend. There is a command prompt, along with a run prompt.

Both can be used to run Windows applications from their virtual C and D partitions inside My Computer. I’m not the biggest fan of dragging the window dialogue box across the screen, as it gets stuck halfway, outside the screen.

The mobile version has a long way to cover, but it gets the idea right. We should wait for the upcoming version to dwell more on the compatibility part.

This simulator includes various versions of Windows included with it, ranging from MS-DOS to Windows 7. It is the highest-rated Windows emulator/simulator with positive reviews majorly. 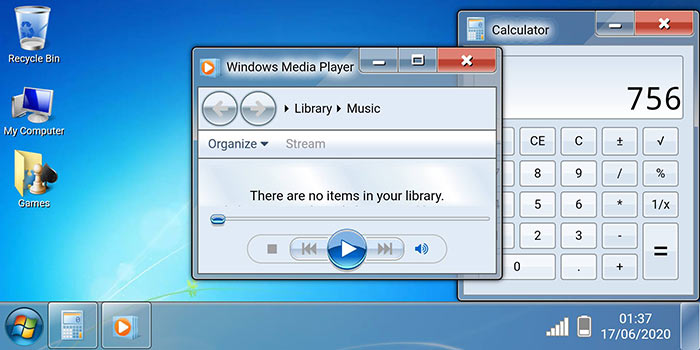 You have the option to use an original Windows installation disk for simulation. It simulates a real Windows OS experience for getting familiar with the things around. You can use general Windows apps like media player, paint and such on newer versions.

The similar takes around 10-15 seconds to boot-up to the desktop. There is an on-screen mouse pointer which can be used with your fingers. Along with it is you get an in-built onboard keyboard acting as a replacement for a real keyboard.

Full-fledged support for Windows 7 ending in January 2020 but the popularity surges on. The most versatile Windows operating system after Windows XP Service Pack 3 hit the right notes with the users.

On launching the app, you get greeted by a Windows boot screen and head to the user login page. We log in as a Guest, and we do not know the supposed username and password. 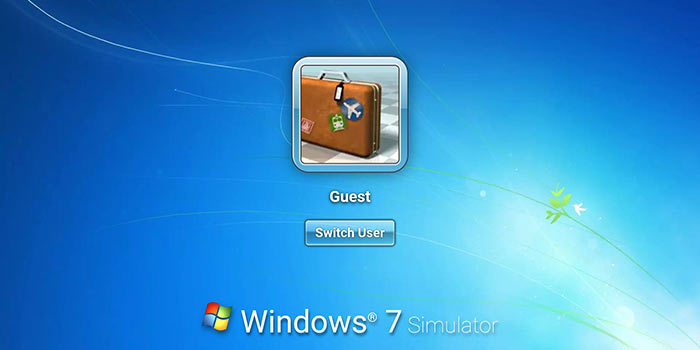 Win7 Simu is here to bring you back the super 7. Windows 7 emulator on Android with basic functionalities work fine like a well-aged wine. The task-bar sports a battery indicator for your device. Moreover, the control panel has settings for your device.

Classic games such as Minesweeper and Purble Place can be found on the desktop itself. The window drag around the screen is flawless for the apps and average experience for explorer windows. 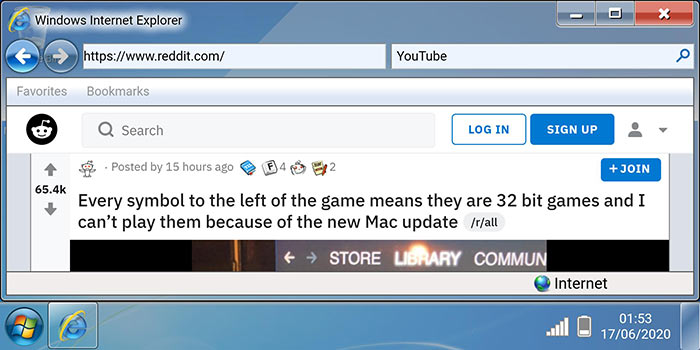 The Internet runs fine on Internet Explorer. While videos on YouTube didn’t just load, other text and image websites worked more than okay, including Reddit.

This one can be considered as a pretty basic Windows 98 emulator for surfing the Internet and playing around with the essential apps like media player, notepad, etc. Like any other simulator, you cannot install the majority of the applications.

Apart from the normal functioning, the mouse-pointer is there, which is your only source of clicking, the opening of apps. The keyboard can be brought out by clicking on the Keyboard symbol on the desktop screen. 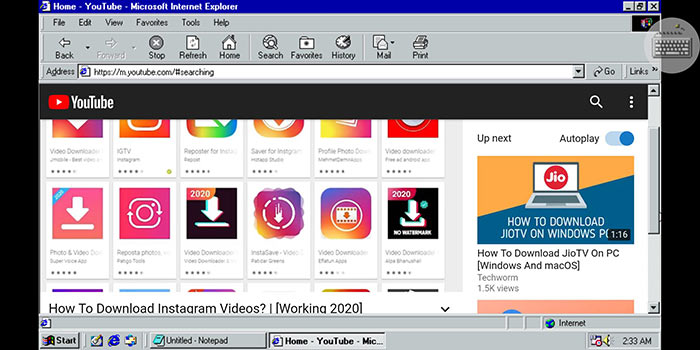 Your phone’s default web browser powers the Internet Explorer on this one. You can watch surf virtually any website through it. YouTube videos work flawlessly on the browser, with a minimal screen resolution to watch it.

Limbo emulator is another great open-source PC emulator for android.

It virtualizes lightweight PC operating systems on your phone.

If you are looking for a windows 10 emulator for android then this surely is the best choice for you. 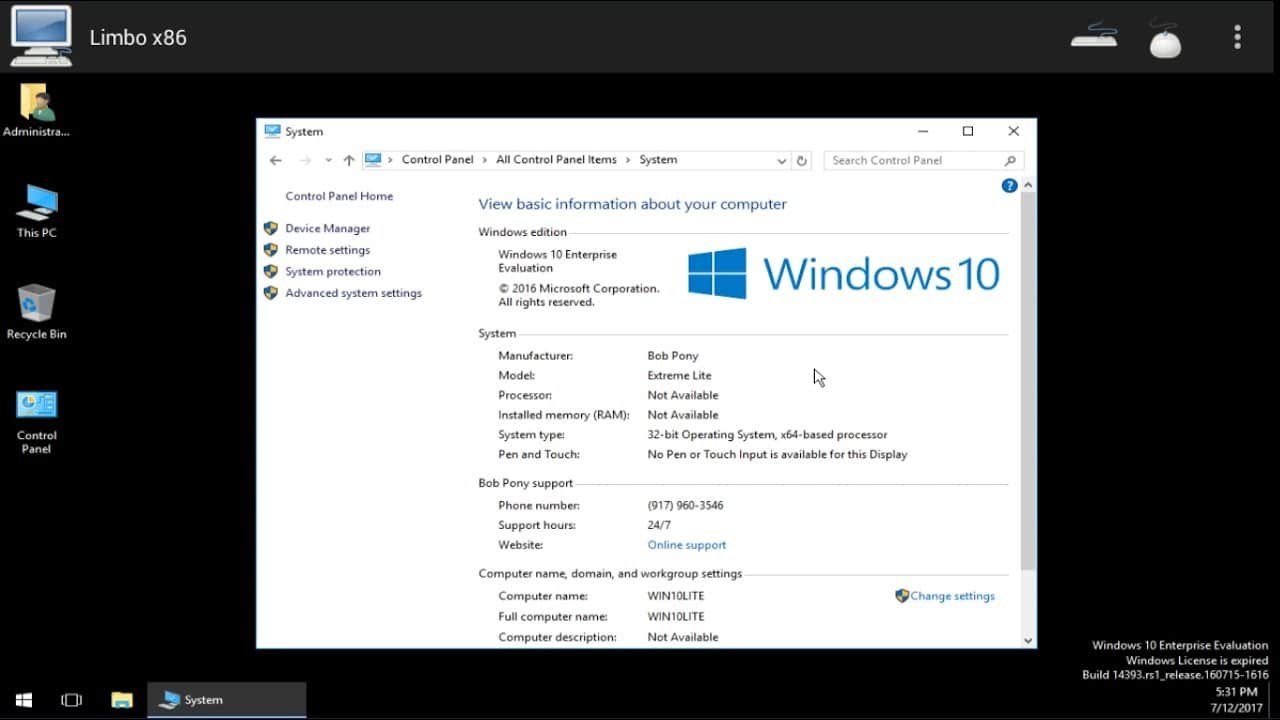 You can easily run Windows 10,8,7 apps on your android phone using it.

Can you run .exe on Android?

This doesn’t mean you will be able to access the full functionality of the app. But just the limited feature.

Most of the apps won’t even work properly.

Can I run PC games on Android?

You can play PC games on android using cloud gaming or Parsec app.

The first one on the list, Wine, came pretty close as a Windows emulator for Android devices. The other three aim at providing a wholesome Windows environment with basic functionalities.

The latter ones provide a decent Internet surfing experience with being powered by your device’s default browser. We will update the list WITH more Windows emulators as they become available. Watch out this space for more.