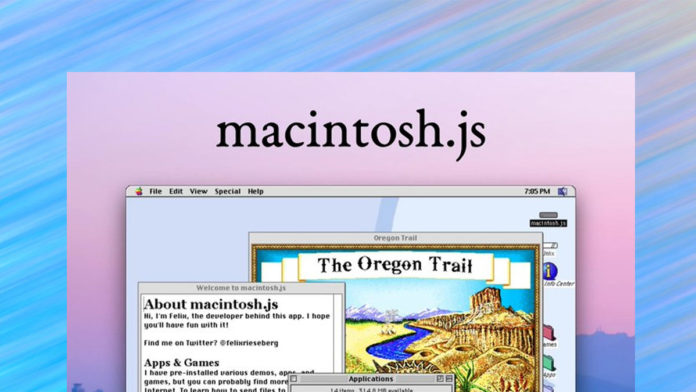 Apple computers have made strides in making computing easier over the last 4 decades. They continue to push the envelope with their innovations and out of the box seamless transition to newer technologies.

In the summers of 97′, Steve Job had returned to Apple and the new age operating system, inspired from the failed project Copant, was beginning to take shape. Mac OS 8 was the largest overhaul for Apple to its operating system, that defined the next a decade or more, and continues to play an eternal part of the philosophy.

Now, lets go back in time with the Mac OS 8 emulator, developed by Felix Rieseberg from Slack, as a pet project.

The multiplatform software titled “macintosh.js” is a result of Felix pushing the entire 1991 Macintosh Quadram running Mac OS 8.1 into a single app written in JavaScript, compatible with Windows, Linux, and macOS. It relies on a virtual machine to emulate Mac OS 8 on the computer and OS of your choice.

Additionally, the emulator ships with a bunch of demo games and trial apps such as Photoshop 3, Premier 4, etc.,  to get a hang of things.

I put an entire 1991 Macintosh Quadra with Mac OS 8.1 into an Electron app, together with a bunch of apps and games. It runs on Windows, macOS, and Linux… and JavaScript. Again: I'm sorry.

Can we play games on it?

The answer is, YES.  Coming with pre-installed games from the MacWorld Demo CD that came bundled with the old Macintosh computers. The developed has successfully tried the likes of Oregon Trail, Duke Nukem 3D, Civilization II, Alley 19 Bowling, Damage Incorporated, and Dungeons & Dragons.

Can we surf the Internet? Go online.

Unfortunately NO, Rieseberg further adds “For what it’s worth, the web was quite different 30 years ago – and you wouldn’t be able to open even Google.” Hence, you cannot run the good old Netscape Navigator yet on the emulator.

How about transferring files back and forth?

Green signal for that, YES. All you need to do is click on the help button of the app you are running to see the necessary instructions for it. Furthermore, transfer files directly or mount disk images.